LUETEC contributes to the European Project RAISE, by adopting the O4 Policy Recommendations to counter the Hate Speech

How many times did you listen to talk about the Hate Speech? What is it?

The Hate Speech is a widespread phenomenon that occurs in different contexts both offline and online. It is not easy to counter it, above all between young people. Then the partnership of the Erasmus+ project RAISE! thought to find different ways to face this phenomenon, trying a common definition of Hate Speech in Europe: 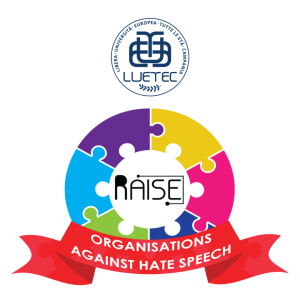 So LUETEC decides to give own support subscribing a letter of intent that attest the commitment to follow the Policy Recommendations provided by the Partnership of the project.

LUETEC received the LABEL for adopting Policies with other organisations, institutions, local and regional authorities, private companies, universities and youth groups from all over Europe to foster social inclusion and contribute to the prevention and counteraction of hate crimes.

As we always think: the unity is our strenght!